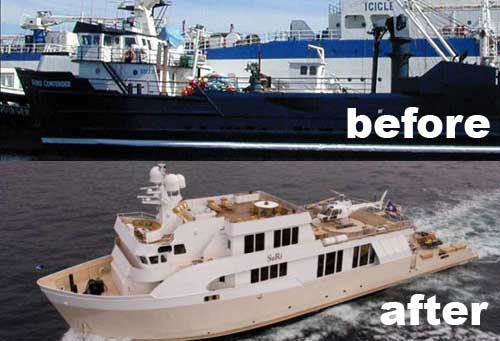 The launch of yacht RAGNAR finally prompts me to write this piece about yachting differently. For those not in the loop, RAGNAR is a conversion from an ice-breaking PSV (platform supply vessel) into an exploration luxury yacht.

As a youngster sailing with the sea cadets, I often saw ex workboats being used as yachts in our northern waters. The boats the cadets used were mostly repurposed patrol boats, tugs, anything large enough to hold a lot of young people in camping conditions and were not too expensive to operate.

A huge boat for little money!

I saw many people start a project with a dream, buy a workboat for a song, fail, try to sell, and finally the project would die and the owner be the poorer for it. Others, though, made it, mainly because they were realistic about the costs and size of the boat. They ended up with something that was not standard, often bigger than what they could afford as new build or even second hand yacht. They thoroughly enjoyed the boat and ignored any comments from outside.

Translated in our today world of glitter and glamour, I sometimes still see people smirk at similar endeavours, albeit on a larger scale. Let me give you a few examples of things that have worked well:

This conversion of a large fishing vessel is definitely not following the canons of proper looks. She has a huge swimming pool/tender dock with landing barge style aft door. The master cabin is in the wooden structure on top of it. What do you think?

These two yachts had extensive interior refitting but the outside was barely altered. The result is that most changes are cosmetic and do not require structural dismantling. An additional perk kicks in when there are no class sensitive alterations requiring plan approval.

It is not always possible to keep it down to cosmetics. In some workboats, spaces such as the engine and technical rooms take much more space than actually needed by the yacht

Sometimes, the repurposed boat remains covering part of its prior function. ALK, while sometimes used as a yacht, is principally the submarine tender and training ship of U-Boat Works. SARSEN was used as an exploration yacht, but also chartered out to scientific projects in which she would have mostly professionals on board.

Clearly the incentive to make a conversion that is not as extensive as that of RAGNAR is fast delivery and reduced cost. It is not uncommon though for such a project to drift into further refining and end up being as lengthy or as expensive as a new build with the same finish.

What you accept when undertaking such a project is instant devaluation. There is little to no chance that the final result will be attractive to a new buyer in the same state or configuration. One must thus accept that the yacht can possibly only be sold-on at the price the original conversion object was purchased, if that. Most of the cost done in the refit are probably forfeited.

One of the most striking example in the last years is ULYSSES. Not a conversion, but a new build yacht with “workboat” looks and non-faired no-high-gloss hull paint. The intention was clearly to let the world know that this yacht means business.

The owner of ULYSSES ordered a new yacht, almost identical but slightly longer, even before the first one was launched, putting ULYSSES up for sale at the same time. Within six months of her launching, ULYSSES was brought to a shipyard to be fillered, faired and high gloss painted. We can only assume that it was upon advice from brokers and market players for a better resale value. The second ULYSSES was launched with a faired high gloss finish.