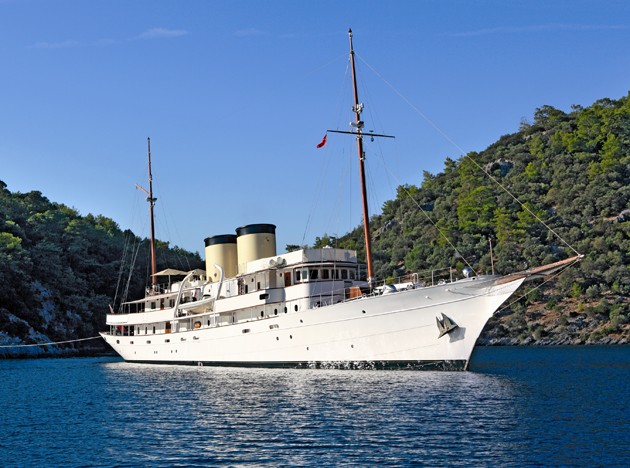 Talitha was built by Krupp among a series of similar looking yachts of which we still have at least four in existence today. During her long life, she has suffered several modernisations, or enjoyed them, depending on how one feels about them. They led to the unique look she sports today.

During her most significant refit, Jon Bannenberg elected to add a second funnel to conceal radars and other aerials as well as modern hardware. This comes as a shocking deviation from her original look. Both funnels were later enlarged to accommodate more equipment.

Albeit not original, the look can be considered acceptable for conoisseurs. The picture above shows Bannenberg’s draft (top) against Rozenkavallier (today Haida 1929, bottom). This last had a second funnel fitted at some point in her life, also to hide antennas. Savarona (below) always had twin funnels (but then again, she is a way larger ship).

There are two arguments at stake:

–      The other is to remain as close as possible to the original yacht.