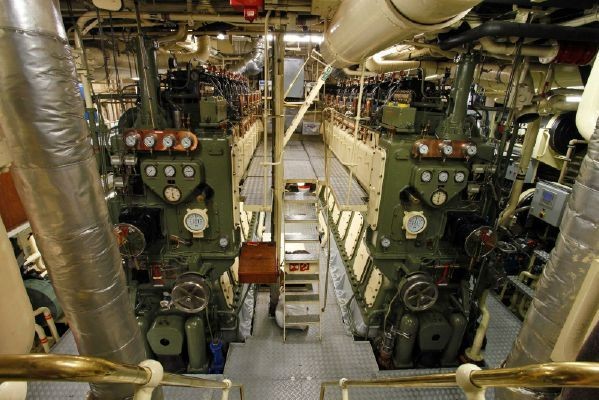 Several large pre-war steam yachts were refitted in the last 50 years. They usually received diesel engines instead of the original turbines. There are very simple reasons for that: it saves crew, makes maintenance easier and gains a considerable amount of additional comfort space… But the main reason may have been that, after some years in relative abandon, the turbines were simply too wasted away to be reconditioned. The most visible ones were “Savarona”, “Christina O” and “Nahlin”.

Many other yachts that were built in the thirties with diesel propulsion have received more modern engines later in a normal refit process. Just to name a few, “Dannebrog” (below), “Talitha”, “Malahne”…

Then, there is the odd one out: the pride of the yacht “Haida 1929” is that she still has her original engines. The cost of that choice is high. The engine room has to be manned at all times, the engines take about four times the space of the modern equivalent, spare parts have to be manufactured…

How do we make such a choice?

Sometimes, it is dictated by necessity. We need more space in the engine room to put air conditioning, stabilizer hydraulics and all the accessories of modern comfort. Conversion to Diesel electric, or hybrid becomes an attractive option as environmental awareness gains ground. One argues that the original engines are not really museum pieces, their maintenance is expensive, and they are not worth a visit by guests or friends…

A good example is the project “Rossy One”, a near sister to “Haida 1929”. She had been fitted with MAK engines in the seventies, when she was used as a passenger ferry. Definitely, those have no historical significance and must make way for a modern, more sensible and cleaner propulsion. That would free premium space for additional machinery and service spaces.

The example above shows a typical classic yacht with the original engine room (Green + brown), the possible reduction by changing engines (brown only), and in a more ambitious project, the engine room moved aft (yellow) to reclaim the widest part of the boat for guests and services.

In a different case, I remember our team reflecting on the opportunity to replace the engines of “Legend” with a diesel electric propulsion. “Legend” was a tug conversion, and the removal of the original engines would free a lot of space, but also force the owner to add several hundred tons of ballast to keep the boat in trim. In that case, keeping the engines made sense. While “Legend” is not a “classic”, that theory could be applicable on similar older vessels.

One can only dream about the endless possibilities of additional arrangements (an estimated almost 300 GT of space) that would open if a yacht like “SS Delphine” were to be converted from steam to diesel or hybrid propulsion. That of course would be a crying shame, or would it?