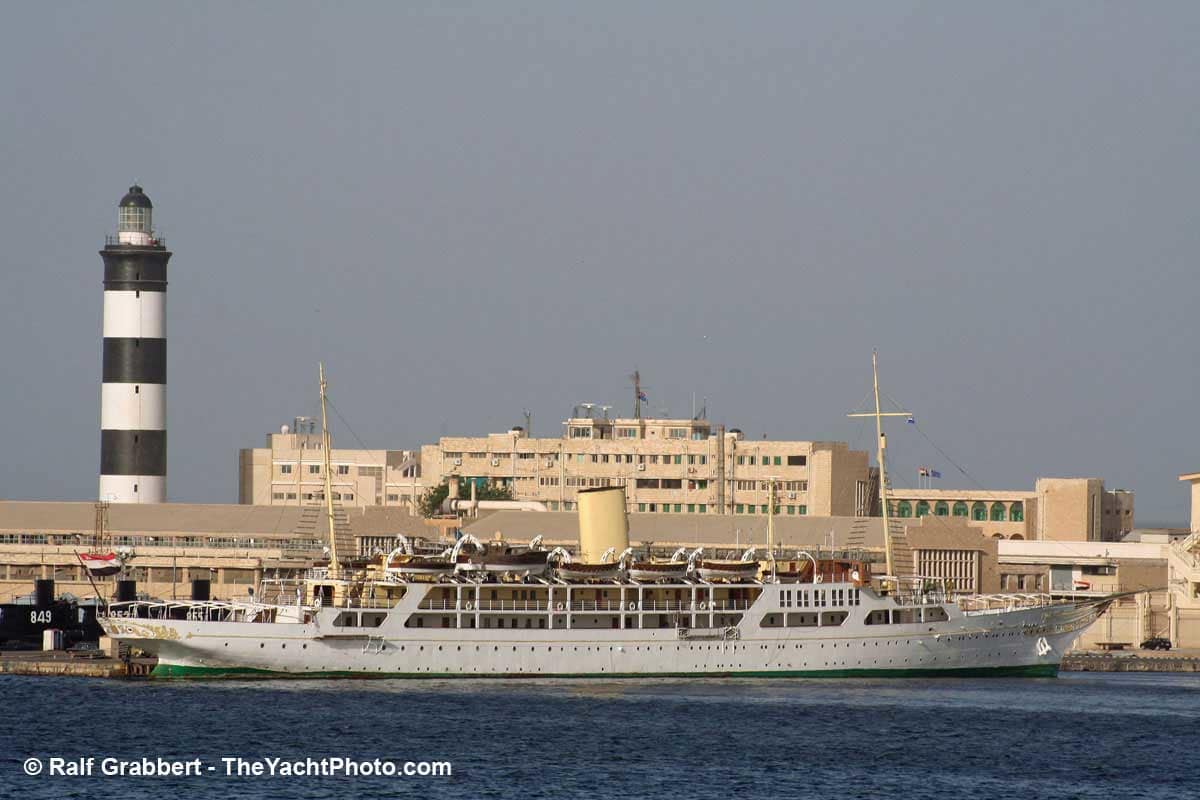 Someone asked me recently if there was an old classic yacht available for sale in the 80m+ range. It gives me the perfect opportunity to make a short list of pre-war classics still around today. They are mostly motor yachts, although one is a sailing vessel and two others are steam ships 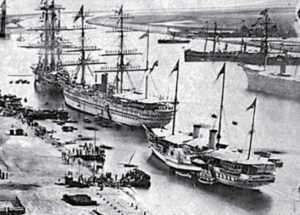 The state yacht of Egypt started life as a paddle steamer. Three refits and two enlargements later (see title picture), she is the largest, but also the oldest yacht in this list. 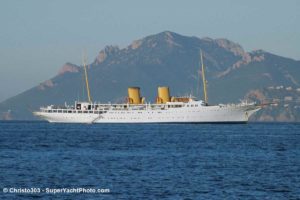 Savarona’s claim to fame is having briefly belonged to Mustafa Kemal Atatürk, the father of modern Turkey. She was exposed in some scandals recently under private charter, and returned to full state control. 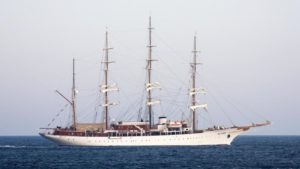 Built as a yacht, she is now operated as a luxury cruise liner, retaining a rig close to the original one. 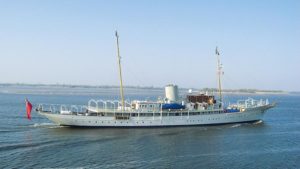 Recently salvaged and completely refitted as a private yacht, Nahlin’s claim to fame is a secret cruise made on her by king Edward VIII and Wallis Simpson.

Reportedly training ship for the Egyptian navy (thanks Daniel Taylor for the hint). Shown here alongside El Mahroussa

Born as Phylante, she towed and tendered for Endeavour II during the 1937 America Cup challenge by T.O.M. Sopwith. Nowadays she is the Norwegian royal yacht 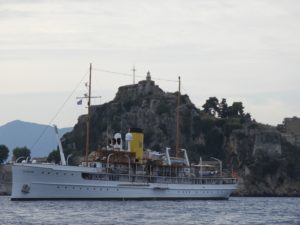 The largest privately owned steam yacht afloat, she was completely rebuilt in 2000 to modern passenger ship standards, but respecting the original 1921 drawings for public spaces. Her claim to fame is a direct involvement with the preparations of the Yalta agreements while she served as the US Navy’s CiC floating office.

So here above is the answer to the question. There are seven 80m+ pre-war yachts still in commission today. Four of them are state yachts and definitely not for sale. One may argue that Christina O belongs in this list, but her conversion is very much post-war.

The shape of those yachts tends to be either modern or influenced by the past. SS Delphine has the same bow as period US capital ships, while Norge looks like a small version of the passenger ships of the day. On the other hand, as we can see from Nahlin and Savarona, the late twenties were marked by a fancy for the lines of 19th century steamers, with tall masts, clipper bows and long stern overhang. The Krupp shipyard in Germany produced a series of such yachts, some of which are still in service today:

All three were originally quite similar, although Talitha was later adorned with huge twin funnels giving her a bit of the look of Savarona, and hiding all modern arrays and appliances.

From the Copenhagen naval dockyard comes the Danish state yacht Danebrog, in the same style and close to Talitha at 74m.

Madiz, at 61m, is a bit smaller. She is also almost an original 19th century steamer having been built in 1902 with coal fired boilers and compound engines.

The yacht from the late thirties were way more modern in shape, along the same profile as Norge:

Alicia: 1930, 51m, Diesel (currently being rebuilt to her original lines)

… and smaller famous little ships like Blue Bird and Fair Lady, Kalizma (God, what have they done to her?).

Also across the pond, there are a few noticeable yachts still in existence: Thea Foss, Taconite, Caritas, and that wonderful steam yacht Cangarda.

All pictures from Google searches or as credited