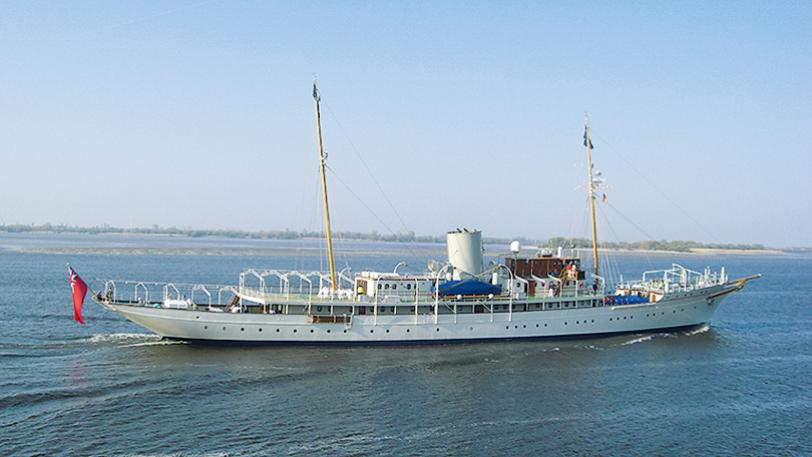 If you have to ask how much fuel she burns, you can’t afford her, to paraphrase the mythical J.P. Morgan quote, or why are modern yachts so inefficient?

A bit of history going back to the beginning of the age of steam. Till then, a boat that needed to give some speed was designed with the most efficient possible shape, to be able to deliver in the weakest of winds with the sails she could carry. Early steam engines were not very powerful, so hull shapes remained quite slender. Only the very largest of ships, sail or steam, could afford to have a more bulky form and still deliver. That is mainly because they were operating way below their hull speed.

The naval architects will excuse some liberties I take below to try and make things clear. Basically, the hull speed is a function of the square root of the length. As soon as a ship moves through the water, she will make ripples along her length. Faster and the ripples become longer waves until there is just one single wave peaking at the bow and stern. At that point, in theory, the ship cannot go faster… unless it changes its shape. As you get closer to that point, the relation speed to power becomes exponential and finally vertical.

Back to history. Yachts are prestigious affairs, so they would emulate the shape of hulls that need to be fast more than they need to carry heavy loads. That is the reason why yachts in the early XXth century either look like sailing ships or like warships. As higher engine powers became available, Owners asked for bulkier yachts, with more volume, more decks and as little draught as possible. That results in hulls with larger block and prismatic coefficients, less deadrise, wide immersed transoms and more rounded entries. The hull speed remains the same, only you need more power to reach it.

people started thinking about breaking that “hull speed” barrier, either through sheer power, or by shaping the hull so it will lift above the water and thus beat the “wave” pattern. That is your standard planing boat (or more rarely, ship). Tank testing has also allowed designers to “fool” the water into thinking the boat is actually longer. That is a combination of hull shape and submerged transom that works a bit like the spoiler of a car. Call it “fast displacement hull” or even more recently “hull vane” (that is actually an underwater spoiler).

The main drawback of these designs is that hey do away with hull efficiency and rely on sheer power. Today, that is becoming less and less acceptable. Several designers out there, very often coming from the sailing yacht scene, have started to draw vessels with more realistic (or shall we say environmentally friendly) length to speed ratios, form lines and coefficients.

Some examples in practice:

The hull speed of a 70m yacht is somewhere between 19 and 20 knots.

As we pass 2010 and move towards the current decennia, the installed powers tend to go down, or the maximum speeds go up. Still no ship in the 70-80m range today beats 16 knots on 2600 HP.

Note too that many of those yachts have an official maximum speed way above the declared cruising speed, particularly if it approaches 19 knots. As reported in other sources recently, it is not uncommon for a yacht to fail to achieve the design speed while remaining within the IMO design parameters of the engines.